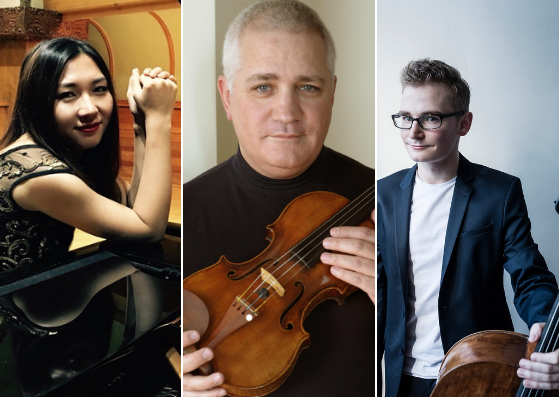 It is Beethoven’s 248th Birthday, and the party’s at Hey Nonny! There will be cake! And some really exquisite music. Three amazing chamber musicians — violinist Stefan Hersh, cellist Alexander Hersh, and pianist Mizi Li, will gather to present three amazing Beethoven pieces.

Violinist Stefan Hersh is a partner in Darnton & Hersh Fine Violins in Chicago. Since 2003 he has been Artist Faculty at the Chicago College of the Performing Arts at Roosevelt University where he serves as Director of String Chamber Music. From 1995-2003 Hersh was Associate professor at De Paul University. Hersh’s career as a performer has included positions as Principal Second Violin of the Minnesota Orchestra (1991-1995), and Associate Concertmaster of the Vancouver Symphony (1989-1991). Hersh was a founding member of the Chicago based Callisto Ensemble (2002-2010), a founding member of the Chicago String Quartet (1995-2000) and a member of the of Chicago Chamber Musicians (1995-2000.)

Pianist Mizi Li began her musical studies at the age of five years old in her native Hohhot, Inner Mongolia, China. From 2010 she studied at the Central Conservatory of Music in Beijing, under the guidance of Xian Zou. After finishing her bachelors degree in piano performance, she moved to Chicago to enroll as a Masters student at the Chicago College of Performing Arts at Roosevelt University with the acclaimed pianist Dr. Winston Choi. In 2011, Ms. Li won the First Prize in the Senior Group in the 5th Asian Youth Music Competition in Beijing. In 2015, she was the winner of 2015 CCPA Solo Competition, and the second place winner of the Cliff Dwellers Arts Foundation 2015 Piano Competition. Ms. Li has participated in many music festivals, include the 6th Beijing International Piano Festival, 2010; The 16th Season International Keyboard Institute & Festival in New York, 2013; the 2015 Karlovac Piano Festival in Croatia; the 2nd International piano Festival in Italy; the Mateus Music Academy 2015 in Portugal, the 2016 Gilmore Keyboard Festival in Kalamazoo, Michigan; the 2017 Edward Auer Winter Workshop and the Summer Workshop in Bloomington, Indiana.