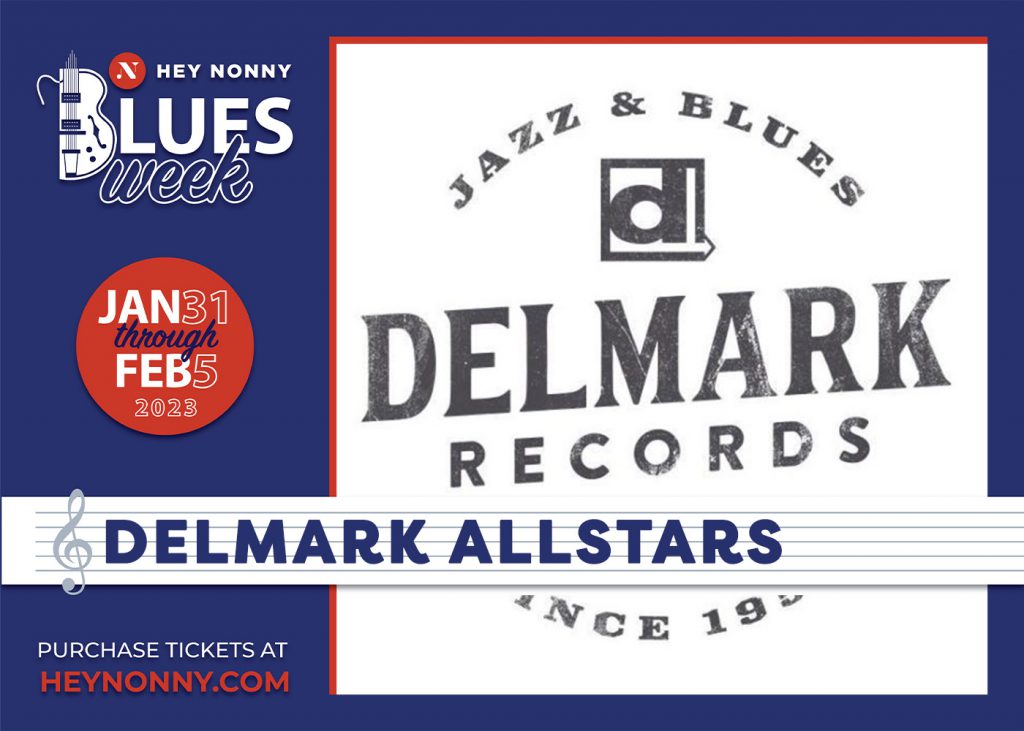 The Delmark All Star Band:

The Delmark All Star Band has a long and well-established tradition, going back to the famous Delmark Blues Brunch during each edition of the old Chicago Blues Festival at Grant Park. The band showcases the multiple talents of Delmark recording artists who loved playing together and living together the joy of blues.
For this show at Hey Nonny the Delmark All Star presents a constellation of blues star on their own right:

Jimmy Burns: Singer, guitarist, and songwriter, Jimmy Burns is a contemporary bluesman who combines his Delta roots with R&B and soul to come up with a sound uniquely his own. Burns is a charismatic performer with an expressive, soulful, voice and a melodic guitar style to match. He has 4 albums on Delmark and is one the most beloved personalities of Chicago blues.

Sharon Lewis: She one of the finest vocalists on Chicago scene, today. “Basically, I wanted the message to be about dealing with life – coping, surviving.” Sharon says. Her songs are dealing with the basics of everyday life. The blend of soul, blues, and R&B delivers the perfect soundtrack for her lyrics. Sharon has two amazing albums on Delmark Records and her 2022 Ballantine’s Day single put her at the top of the international blues charts.

Bob Stroger: at 92 years of age bassist and singer won Bass Player of 2021 and his most recent album has topped all the traditional blues charts around the world. He is one of the living master of the blues, he has played with the who of who of blues, like Jimmy Rogers, Eddie Taylor, Eddy Clearwater,  Sunnyland Slim , Louisiana Red, Buster Benton, Homesick James,  Snooky Pryor, Odie Payne, Fred Below and many others. He is one of the artists with a longer and deeper relationship with Delmark Records: his bass can be heard in thirty four Delmark Albums.

Willie “The Touch” Hayes is one of the living masters of blues drums and a Grammy Award winner. He has been Inducted into the Chicago Blues Hall of Fame. On addition to his musical career he is an actor in movies such as “Thief”, “Hardball”, “Ali”, “Road to Perdition”, “The Express”. He worked with Tom Hanks, Will Smith, James Caan and Dennis Quaid, among others.
He has been the chosen drummer for: Son Seals, Junior Wells, Magic Sam, Chainsaw Dupont, Luther Allison, Carey Bell, Johnny Dollar, Mighty Joe Young, Buddy Guy, B.B. King, Albert Bashor, Otis Clay, Muddy Waters, Willie Dixon, Koko Taylor, Luther Allison, The Temptations, Lurrie Bell, Big Twist, the Mellow Fellows, and more.

Billy Flynn joined Jimmy Dawkins’ backing band in 1975 and since then he has become one of the most respected masters of the blues guitar.  he has worked and recorded with Bryan Lee, Little Smokey Smothers, Mark Hummel, Willie Kent, Snooky Pryor, Big Bill Morganfield, John Brim, Jody Williams, Little Arthur Duncan,  Deitra Farr , Billy Boy Arnold and many more blues stars. He is a permanent presence in Delmark’s recording sessions and he has an album as a leader on Delmark, the greatly admired “Lonesome Highway”.

Roosevelt “Hatter” Purifoy Jr. has performed for decades with a who’s who of artists: Buddy Guy, Marvin Gaye, Son Seals, Jimmy Johnson, Willie Clayton; and he appears on dozens and dozens of recordings, likely into the hundreds, included several Delmark Albums. His talent for adapting his style to best support other artists has led to sessions with Lurrie Bell, Syl Johnson, Sugar Blue, Larry McCray, Eddie Burns, Mavis Staples, the Kinsey Report and Jimmy Johnson’s final album “Every Day of Your Life”.