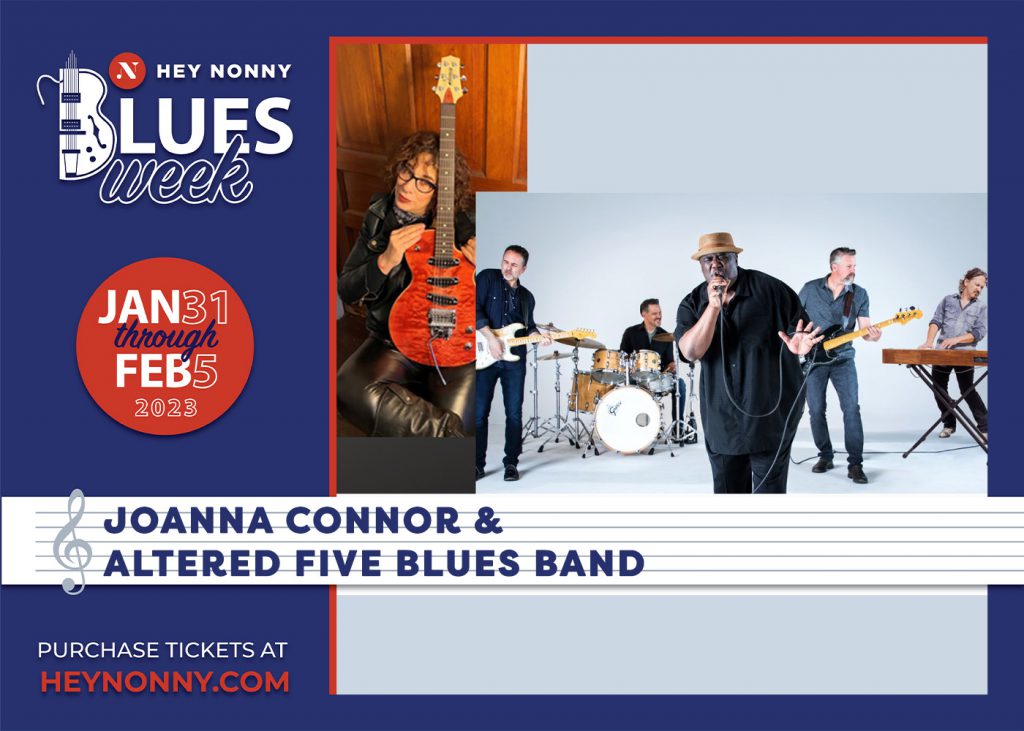 Altered Five smokes, smolders and burns like a swig of good whiskey. The hip Milwaukee quintet is known for its strong brew of tough, original blues and hard-hitting live shows. Blues Blast raves that barrel-chested front man Jeff Taylor possesses a “smooth, warm-toned voice as monumental and undeniable as Howlin’ Wolf with the finish and flourish of B.B. King.” Downbeat declares stealth guitarist Jeff Schroedl “reaches the high bar of mixed invention and fluidity.” Fueled by a rhythm section laying down the deepest grooves this side of the MGs, the five blues blasters hit the ground running 20 years ago and show no sign of easing up. Their sixth studio album, Holler If You Hear Me, debuted at #3 on the Billboard Blues Chart and received three Blues Music Award nominations, including Album of the Year and Song of the Year.

The new record kicks hard like the three award-winning records preceding it. Cryin’ Mercy nabbed “Best Self-Released Album” at the International Blues Challenge in 2015. Charmed & Dangerous garnered “Song of the Year” at the Independent Music Awards and Wisconsin Music Awards in 2018. Guitar World magazine called the title track a “menacing, swampy blues” and it was in regular rotation on SiriusXM’s Bluesville in addition to many other programs and playlists. In 2019, Ten Thousand Watts reached #10 on the Billboard Blues Chart, hit #1 on both the iTunes and Amazon blues charts, while “Great Minds Drink Alike” captured first place in the blues category of the International Songwriting Competition.

Altered Five have consistently checked all the boxes, making lasting, deeply expressive original blues for the mind and body. Up front and leading the big blues train, Taylor exhorts and cajoles while carrying the weight of the lyrical content. Neither imitating nor hiding his debt to the legendary blues singers of the past, he commands deserved attention on his own. Schroedl propels, embellishes, and adds palpable power through his varied rhythm accompaniment and riveting guitar solos. While inspired by, but not tethered to the kings and titans of blues guitar, he has found his own estimable path to personal expression always at the service of the song.

The muscular yet limber rhythm section of bassist Mark Solveson and drummer Alan Arber lock into the full range of blues grooves from classic slow Chicago drag (“Holding on With One Hand”) and romping Texas shuffles (“Mint Condition”) to soulful R&B worthy of Stax Records (“Gonna Lose My Lady”). In addition, returning keyboardist Steve Huebler always provides a rich pad of lush harmony along with his own and soaring solos.

​Whether live or on record, Altered Five performs seamlessly as a powerhouse entity encompassing the timeless blues virtues of passion and unwavering commitment funneled through technical excellence.

“Music chose me. I vividly recall trying to sing like Louis Armstrong’s ‘Hello Dolly’ in our Brooklyn apartment. It came on the radio often. I knew I was small, but when I researched what year this version was on the charts, I was floored with the realization that I was two years old!”

And so, Joanna Connor’s musical odyssey began. The soundtrack of her childhood in her adopted hometown of Worcester, Massachusetts was diverse and bounteous. The Blues was part of the lexicon. Joanna’s favorite record as a child was Taj Mahal’s “Take A Giant Step/ The Old Folks At Home”.

Seeing Buddy Guy perform at a local university at the age of 10 left a paramount impression. Playing saxophone, guitar and singing through her school years were her passions, and eventually led to her performing professionally at age 17.

But her hunger to become a guitarist first and foremost and her desire to immerse herself in the Blues, propelled her to move to Chicago in 1984.

“It was my university. I went out every night of the week. Within a month I had my first gig with the legendary Johnny Littlejohn. A few weeks later I became a part of Dion Payton and the 43rd St Bluesband. We were the house band at the Checkerboard Lounge, on the south side of Chicago, then owned by Buddy Guy. That’s when my schooling kicked into overdrive. I played with Buddy, Junior Wells, Otis Rush, Sammy Lawhorn, Pinetop Perkins, Hubert Sumlin, Magic Slim, Son Seals, Lonnie Brooks, Koko Taylor, just to name a few. I was blessed.”

Joanna went on to form her own band in 1988 with weekly appearances at the Kingston Mines in Chicago.  Her formidable guitar playing, and distinctive soul-churning vocal ability caught the attention of Blind Pig Records, who released her debut album “Believe It” in 1990.

National and International accolades in the press and radio media resulted into a decade of world tours, a dozen recordings on Ruf Records, MC Records and others, a documentary on Germany’s WDR Television, and a multitude of TV appearances and radio features.

In 2005, she took a hiatus from touring to spend time at home raising her young daughter. Two 15 plus year residencies at the House of Blues and The Kingston Mines, honed Joanna’s considerable guitar and vocal chops even further.

While working continuously in Chicago, a handful of videos of her incendiary slide guitar solos went viral creating quite a sensation and garnering attention from media and established musicians alike. Joe Bonamassa sought her out and offered to produce the kind of record he felt Joanna had always had in her and should deliver to the world.  4801 South Indiana is this record, a blues record that delivers all the raw emotion, passion, and fire that made the Blues so compelling from its inception. Joe Bonamassa did not merely produce, arrange, and play on the record, he enabled and inspired Joanna to pull from deep within her all of what her life in music had given her. While steeped in tradition, the recording is no museum piece, it is alive and it is kicking, once-in-a-lifetime Blues