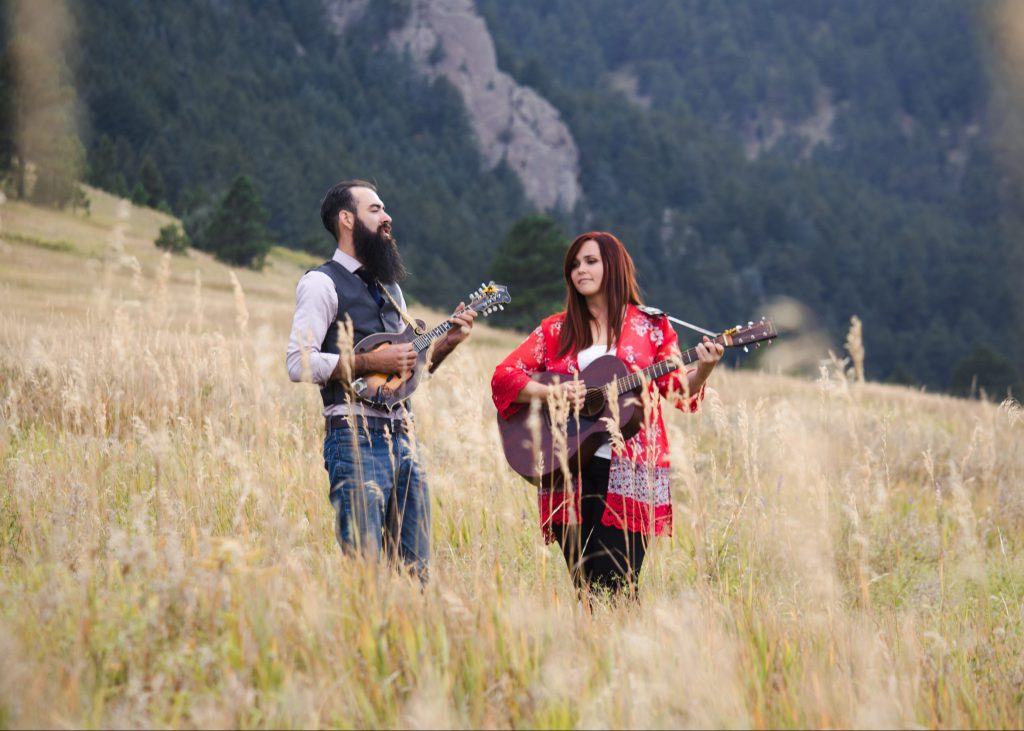 There’s something about the blend of the mandolin, the rustle of the guitar, the gale-like wave of the vocal melody…, that calls you to adventure.

Songwriting duo Emily Burns and Aaron Markovitz have always been adapting. The two Michiganders met as individual music makers in the blues open-mic circles; then they studied their craft together in California, and wound up taking to the seas to cover Top 40 hits for a cruise ship’s dance hall. After that, they started a southern rock-inclined, neo-country quartet, called Escaping Pavement. But most of their fans started finding them after 2014, when they kept their intrepid-sounding name but pared down to just a duo. With just their voices, an acoustic guitar and a mandolin, they wrote and recorded an album (The Night Owl) that was heavy on melody-slung Americana and rollicking, twangy ballads that attained a radiance through their magnificent harmonies. Now, they’re adapting again, this time as Road Warriors.

Road Warriors: … we don’t mean that in a Mad Max sort of way…,, but it’s nevertheless a fitting title for their new EP. It’s been a year of discovery and progress for Escaping Pavement as they’ve entered this next phase.

They played nearly 150 shows in 2018, mixing high-profile slots like the Southeast Regional Folk Alliance with more intimate engagements inside domestic abodes, all the while meeting and connecting with a range of wonderful new fans. They covered 60,000 miles, 28 states, and headlined six sold-out shows, including playing to their biggest audience to date. But with Burns and Markovitz both being John Muir-like romantics for the majesty of nature, they were absolutely thrilled to perform at the Zion Canyon Music Festival in Springfield Utah, right at the entrance to Zion National Park. It quickly became one of the highlights of their year.

Since 2012, through their music and their lifestyle, Burns and Markovitz have extolled the restorative principals of “…Escaping the Pavement.” Fueled by the graceful grit and fine fiery energy of their acoustic guitar, mandolin and swooning harmonies, the intent was to integrate the uniquely holistic qualities of folk, roots and Americana music as a way of accessing an elemental peace of mind that’s always quietly waiting for us out there in the wilderness. While they developed their sound over two prior and very distinctly arranged albums, they tried to emphasize the splendors of unplugging every once and a while and taking in the outdoors, be it parks, trails, beaches, woods or mountains.

But with the release of their third batch of recorded songs this Spring, Escaping Pavement are now embracing a Road Warrior outlook. Sure, they’re still escaping the pavement, but now they’re spending more time cruising across several interstate highways in a vintage, Jayco RV. Because from here on out, they’ll be consistently striking out for new territories and bold new experiences—particularly by taking on music as their full time profession. While any average independent artist probably has a day-job tethering them from full time tours, Escaping Pavement are making it their prerogative now to bring their evocative ballads, twangy rhythmic strums and soaring vocals to as many ears as possible—be it at bars, clubs, or outdoor festivals, or even your living room. The experience of making acoustic music together and getting back to nature can, of course, strengthen anyone’s songwriting sensibilities, but you begin to really find yourself, once you’re out there on the road!

And as “warriors,” they’ve found they’re not defined by battles, so to speak, but more so by a bravery. Sure it’s a brave step for these songwriters to dive in 100% and begin adapting to road-life, but they if they both feel braver, or perhaps more enthused, it’s because of all of the people that they’ve gotten to meet and share time with: a diverse range of unique and affable people, be they music lovers in the audience, or fellow songwriters sharing their stage.

The idea of a “home” for musical Road Warriors is ever-changing. But the question of what a “homecoming” might mean, then, for Road Warriors like them, now, is a more ponderous and amorphous concept that Burns and Markovitz mine to full poetic potential with the songs on their new EP. The intention, and really the lifestyle, now, is to remain as adaptable as ever, and to always be “finding” rather than “searching.” The only certain destination: Escaping the Pavement. 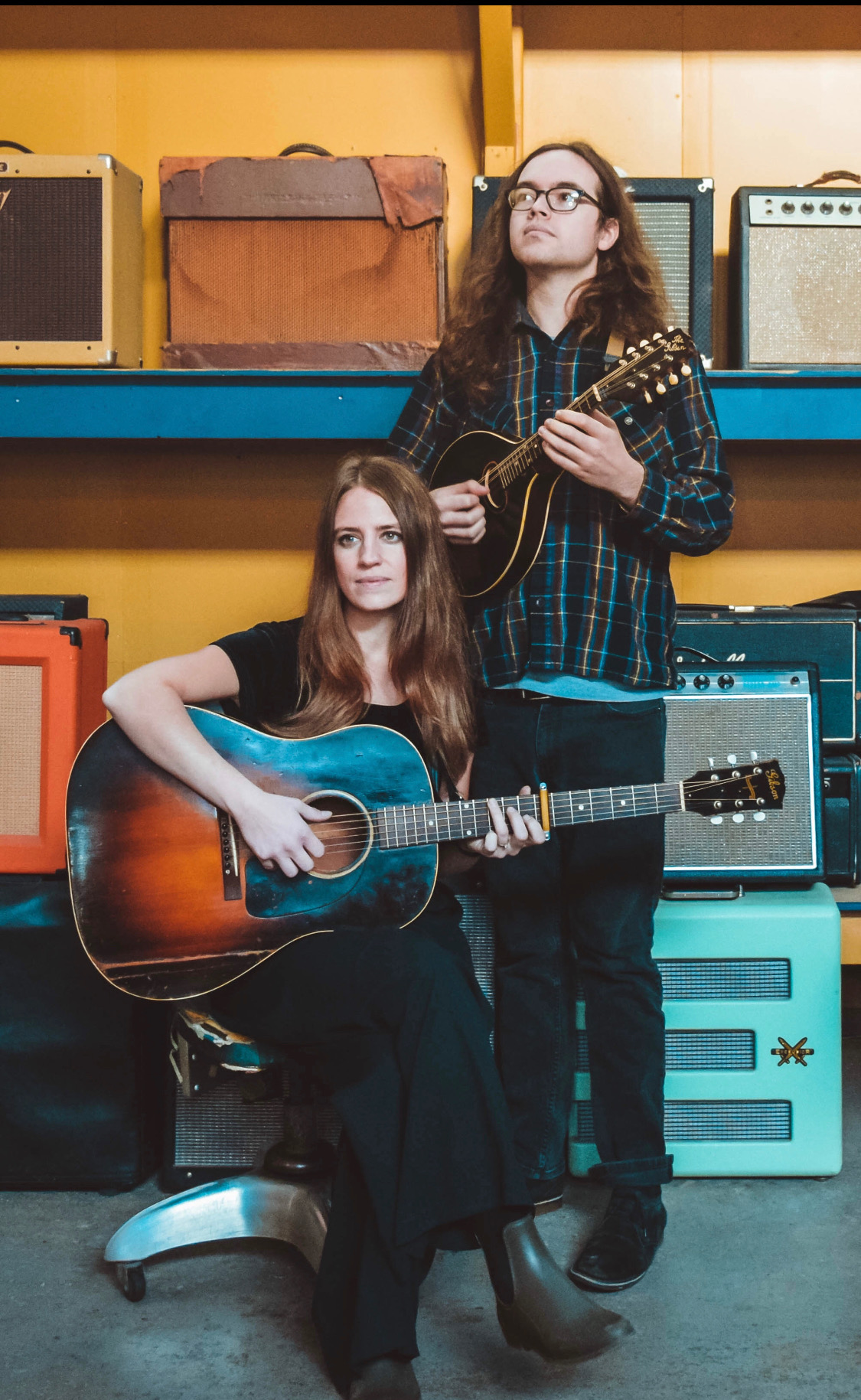 In 2014, after six spiritually formative years living in California, singer-songwriter Christina Eltrevoog returned to her hometown in rural Illinois where she became re-acquainted with a friend from adolescence – Matthew Pittman, who had been playing with various musical groups throughout the state for the past several years. In early 2017, the pair began performing one another’s songs as an acoustic duo titled Matthew Michael & Christina Marie (MMCM). They have been collaborating ever since, writing and performing throughout the United States.

Emerging from their mutual roots in Midwestern US, MMCM engages audiences from the heartland to the coasts with honest songs expressed in harmonically-rich layers of voices and strings. They approach music with reverence to moment, regard for the past, and exploration of the future. Their highly anticipated first collection of songs is slated for release in Spring 2020.

“The music that comes out of me isn’t party music. I’d certainly make party music if it could come from a genuine place. No, I find the songs I write are most enjoyed by those who are hurting and questioning; those who hunger for hope and thirst for peace and seek to change.” — CM