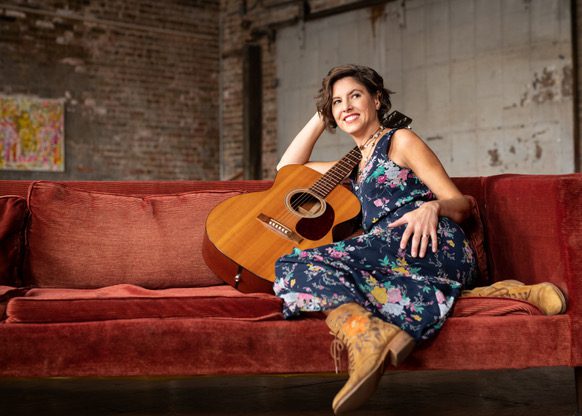 Pianist, vocalist, and arranger Kara Kesselring is a bustling freelance musician and dedicated educator based in Chicago. For over a decade she’s mined the Windy City’s vibrant music scene, establishing an eclectic career.

Highlights include playing keys and singing in the Tony award-winning smash hit Jersey Boys (National Tour, Broadway in Chicago); touring with, arranging, and accompanying breakout PBS retro-rock sensation Under the Streetlamp; as well as composing, arranging, and performing around the globe for educational comedy troupe Wavelength. www.wavelength.biz.

Kara made her music directing debut on the show, A Taste of Things to Come at the Chicago Broadway Playhouse. She had the opportunity to sub on Broadway shows Waitress, A Bronx Tale and The Grinch. She has worked at many Chicago theaters such as Chicago Shakespeare Theater and Marriott Lincolnshire Theater.

Sugarcreek Road blends a modern potpourri of twang-tinged folk, country, jazz, pop and bluegrass to crate a sound that is as raw and compelling as America itself. With award winning bluegrass musicians, Kara’s original music provides a Prairie Home Companion-like experience with stories of growing up in rural Iowa to being a musician in the Broadway smash hit, Jersey Boys for the past decade. Kara performs music from her original album, “Hurry Up & Relax” along with great arrangements from artists such as Lyle Lovett, Emmylou Harris, Alison Krauss. Kara’s been reviewed as “funny, sweet storytelling, gorgeous vocals, and top-notch musicianship.”