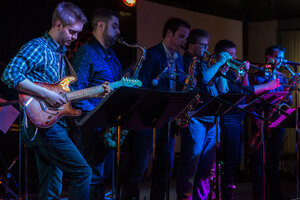 Neil Carson is a saxophonist and composer/arranger whose music spans many genres and disciplines. His work as both a performer and composer often features a mix of jazz, pop, and rock influences to form a new, refreshing but melodic sensibility. From 2010-2016 Neil studied at the acclaimed Frost School of Music at University of Miami, attended by such luminaries as Pat Metheny, Maria Schneider, Ben Folds, Bruce Hornsby and others. Earning a bachelor’s in Jazz Saxophone and a master’s in Studio Jazz Composition, Neil spent three years as a member of the award-winning Frost Concert Jazz Band, and has played with artists such as Chick Corea, Bobby McFerrin, Terrence Blanchard, Steve Miller, Benny Golson, Arturo Sandoval, Dave Liebman, Lucie Arnaz, Maria Schneider, Barry Manilow, and others.

As a composer/arranger, Neil’s work includes compositions for big band, vocal jazz ensemble, symphony orchestra, and small groups. His composition “Ballad for the Hopeless Romantic” was awarded first prize in the ASMAC Bill Conti Big Band Arranging/Composing Competition, and was performed and recorded live in Los Angeles with the Kim Richmond Jazz Orchestra. His work has been commissioned by high schools throughout the Chicago area—including New Trier High School in Winnetka and Glenbrook South High School in Glenview—as well as professional ensembles such as the Blueshift Big Band and the Chicago Composer’s Big Band. As a vocal arranger, Neil has written arrangements for top-caliber artists such as jazz vocalists Cyrille Aimee and Becca Stevens, and his arrangement of the Harry Warren tune “I Had the Craziest Dream” was performed by the Downbeat award-winning collegiate vocal ensemble Pacific Standard Time at California State University Long Beach.

Neil’s most recent musical project is New Nostalgia, a 9-piece ensemble performing Neil’s arrangements of both originals and covers in the jazz/pop fusion vein. New Nostalgia’s 2019 debut album was released to acclaim from Downbeat magazine, and has received airplay on Chicago’s 90.9 FM WDCB radio station.

As an active jazz educator, Neil is currently the Director of Jazz Ensembles at Hersey High School in Arlington Heights, Illinois, as well as a private instructor at Hersey and Stevenson (Lincolnshire, IL) high schools. Neil also previously served on the Jazz Faculty at Midwest Young Artists Conservatory, a top-ranked youth music program in Highwood, Illinois. Also in demand as a guest artist and clinician, Neil has served given clinics at the North Shore Jazz Festival, the New Trier Jazz Festival, and has served as both jazz saxophone and jazz vocal audition judge for the ILMEA District 7 music festival.