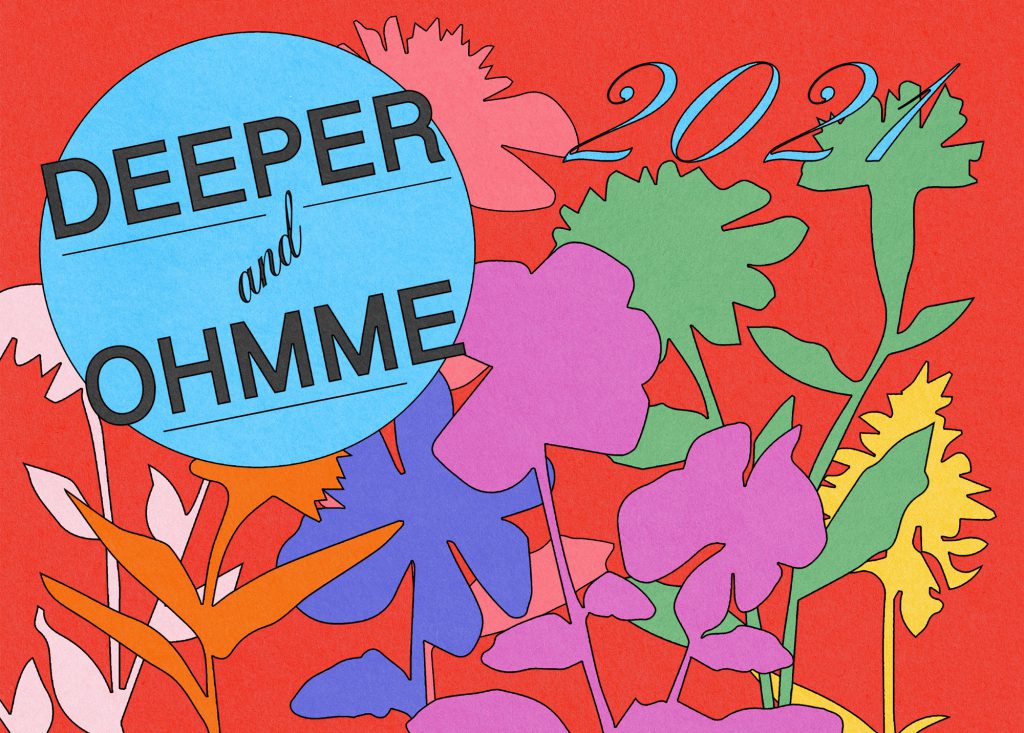 There’s an obvious chemistry emanating throughout Ohmme’s music that’s so tangible it can only come from a decades-spanning friendship. Songwriters Sima Cunnningham and Macie Stewart formed their unbreakable bond performing throughout the fringes of Chicago’s many interlocking communities, collaborating with titans from the city’s indie rock, hip-hop, and improvised worlds. But together, along with drummer Matt Carroll, they’ve stretched the boundaries of what guitar music can do starting with the band’s experimental 2016 self-titled EP and their adventurous debut 2018 LP Parts. Now their longstanding partnership culminates with the stunning and muscular follow-up Fantasize Your Ghost.

Ohmme formed in 2014 as an outlet for Cunningham and Stewart to explore an unconventional approach to their instruments. “That’s the whole genesis of the band: us walking up to our guitars and saying, ‘how can we make this noisemaker do something different?’” says Cunningham. But as their musical collaboration strengthened, bringing Parts and intensive tours with acts like Wilco, Iron & Wine, Twin Peaks, and more, the band’s scope and focus has also broadened. Fantasize Your Ghost is the direct result of the band spending more time on the road than in Chicago, a record deeply concerned with questions of the self, the future, and what home means when you’re travelling all the time.

“Grinding on tour last year for so long, it can alter your mental state where you have to think about your life in a different way than you would if you’re home. A lot of the songs stemmed from just thinking about all of the possibilities that life could be and could take,” says Stewart. On the commanding single “3 2 4 3,” which tackles the terrifying realization of needing to make a change. The song opens with the two singing in transfixing harmony, “Looked in the mirror the other day / Caught my reflection / My mouth had moved a different way / The muscles were straining.” Their deft scene-setting and the way their disparate voices blend together heightens the song’s inherent anxiety. Later, they sing, “Filling the holes to make amends / Tearing them up to start again.” These moments of emotional clarity fill Fantasize Your Ghost.

Written across 2019, early sketches of the album’s tracklist were demoed at Sam Evian’s Flying Cloud Studios in upstate New York. “That’s where we really started to see the record come together,” says Cunningham. The sessions were intensely collaborative and open: the product of long, existential conversations between Stewart and Cunningham in the van about their lives and how to channel the anger they were feeling about the state of the world. Tracks like the driving opener “Flood Your Gut” underwent several revisions with Ohmme uncovering several new directions the song could go before finishing it. The refrain “your whole vision’s not enough” is a call to action, says Cunningham. “Do you want to be someone who can disconnect or someone who is hyper-engaged and present?”

Fantasize Your Ghost was recorded over a six day session in August 2019 when the band decamped to the Post Farm in southern Wisconsin, where Cunningham runs a yearly DIY music festival. With indie rock journeyman producer Chris Cohen and the idyllic setting just outside Chicago, the songs came to vibrant life. Though Parts showcased their wildly burgeoning
influences and talents, Fantasize Your Ghost captures the astounding magnetism and ferocity of their live show. “Selling Candy” is the perfect example. It’s a small snapshot of childhood complete with nostalgic references to summertime hot dogs and wandering the city but set to an explosive, stadium-ready fuzzed-out arrangement. Elsewhere, songs like the dystopian dance rocker “The Limit” further stretch their already dynamic palette.

Fantasize Your Ghost encapsulates the thrilling and sometimes terrifying joy of moving forward even if you don’t know where you’re going. It’s an album that asks necessary questions: When life demands a crossroads, what version of yourself are you going to pursue? What part of yourself will you feed and let flourish and what do you have to let go of? When they sing, “Just walk out the door and / Don’t tell them goodbye” it’s drastic but also exhilaratingly hopeful. This is a record of strength, of best friends believing in each other. Unapologetic and brave, Ohmme are ready to figure it all out together.

Deeper’s Origins date back to 2014 when prior to releasing any material an abrupt line-up change left the Chicago based band looking for a new direction. Singer and guitarist Nic Gohl along with drummer Shiraz Bhatti threw out all of their old songs and brought on bassist Drew McBride to round out the lineup. The subsequent demos leaned on intricate guitar interplay, direct “of the times” vocals and a spirit that speaks to the band’s collective place in this pit of endless internet.

Deeper honed their sound over the course of 2015 & 16’ in basements, lofts, and anywhere that would have them. Touring the demos and landing at a fully realized inflection point. Call it Post-Punk, call it Indie Rock, it’s a record that steps in and out of boxes filtered through an unmistakable midwestern lens.

As social norms and political ideologies distort, writing and creating art was the only way to control the growing voice in the band’s collective head. The conceptualizing of the album started and stopped over that two year time warp culminating in a few feverish tracking sessions in late 2017. What was left is a stark shimmering portrait of a modern American experience.