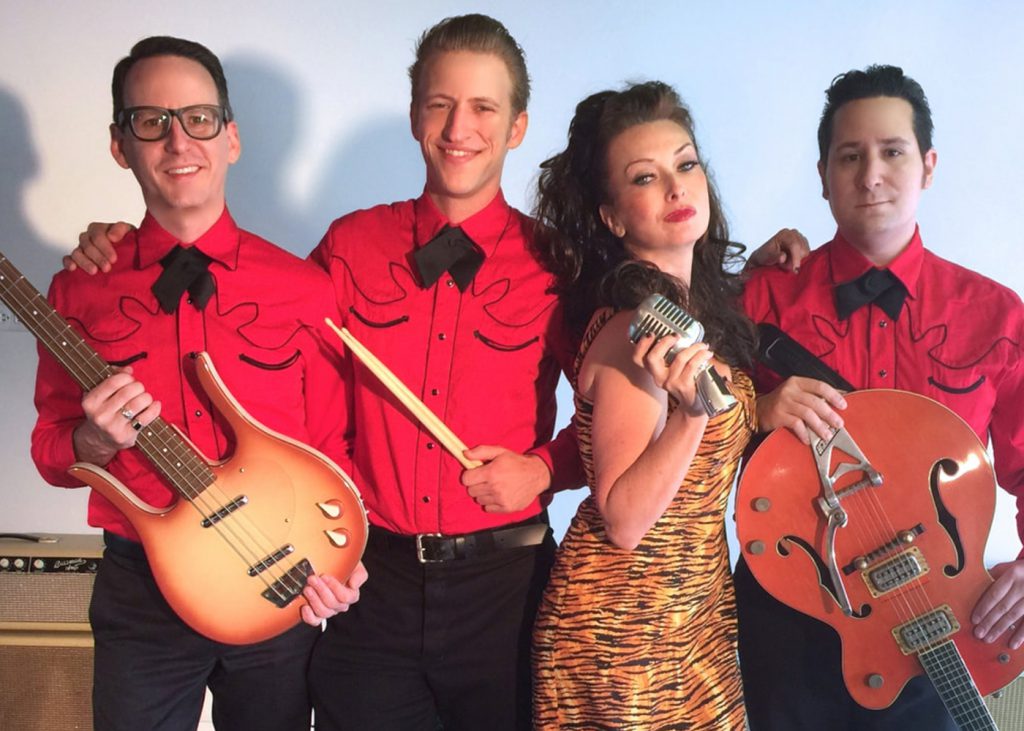 Christine Mikulskis, “Rosie”, co-founded Rosie & The Rivets in late 2015 with the desire to create a fresh act that faithfully conveys the music and visual excitement of the 1950’s and early 1960’s. With an extensive theater and musical background, Christine brings “Rosie” to life onstage with boundless energy and passion for the genre. Her expertise behind the scenes assures Rosie & The Rivets is not a typical band, but a professional and dynamic stage show. Her powerful and versatile vocal stylings have been compared to Ella Fitzgerald, Amy Winehouse, Karen Carpenter, Little Richard and LaVerne Baker. Not only a talented musician, she has modeled for numerous ad campaigns, including: Chanel, Allstate, Windex and Ad Council. As an actress, she has been featured on several national TV shows, most recently “Happily Never After’ on the Investigative Discovery channel.

Frank James was bitten by the music bug at a very early age after discovering his parents collection of Elvis Presley, Buddy Holly and Everly Brothers records. It wasn’t long before Frank was playing guitar, drums and piano along to those records, solidifying his love for all things vintage and a life as a professional musician. He is a former ‘Legends In Concert’ cast member performing the role of John Lennon. He’s played hundreds of shows in Atlantic City, Myrtle Beach and on cruise ships around the world. He has performed at such prestigious venues as Carnegie Hall and Abbey Road Studios. He was a cast member with Emmy Award-winning Beatle act ‘The Fab Four’ and performed nightly on the Las Vegas strip. Recently, he performed as John Lennon with Chicago Beatles tribute ‘American English’ (2010-2014). He co-founded Rosie & The Rivets with Christine Murphy with the common goal to bring an unparalleled retro act to the masses.

Cody “Goose” Siragusa (String Bass): Cody is a Chicago-based bass player. Over the past 10 plus years he has been performing both on and off stage in various productions in the Chicagoland area. Some of his Chicago credits include Oklahoma! with American Theater Company, Pump Boys and Dinettes with Theo Ubique, Bloody Bloody Andrew Jackson with Bailiwick Chicago Theater, Buddy: The Buddy Holly Story at Drury Lane Theater. His experience being a pit musician has allowed Cody to play and explore different genres and styles of music. However, Cody specializes in the rockabilly slap bass style of playing upright bass. For over five years Cody was a member of the Chicago production of Million Dollar Quartet and was able to perform across the country. Since graduating from Columbia College Chicago in 2009, Cody has been able to pass along his bass knowledge teaching private lessons at the North Shore Music Institute, School of Rock Hinsdale and in his studio to students ranging in ages from 8 to adults. Cody is currently pursuing a Master’s degree in Music Pedagogy at Northeastern Illinois University.
Derrick Martens (Drums): Derrick grew up with the sounds of Chicago all around him. Showing musical talent at a young age, he sought out mentors and teachers around town to show him the ropes and start up his music career. At 18, Derrick moved to Hollywood to attend the world famous Musicians Institute, where he was taught by some of the top pros in the industry, and learned to become proficient in various styles of music. After returning from Los Angeles, Derrick’s reputation spread and he began gigging, teaching, and touring the country with various bands. Lately, Derrick has been a core member of such popular local acts as Billy Croft & The 5-Alarm, J.P. & The Cats, Deluxe Edition and original projects called the Top Shelf Lickers and Empire State Express, along with hundreds of sub dates. Derrick brings a youthful and lively energy to his performances, and is always sure to have a smile on his face when playing with this special group of musicians.