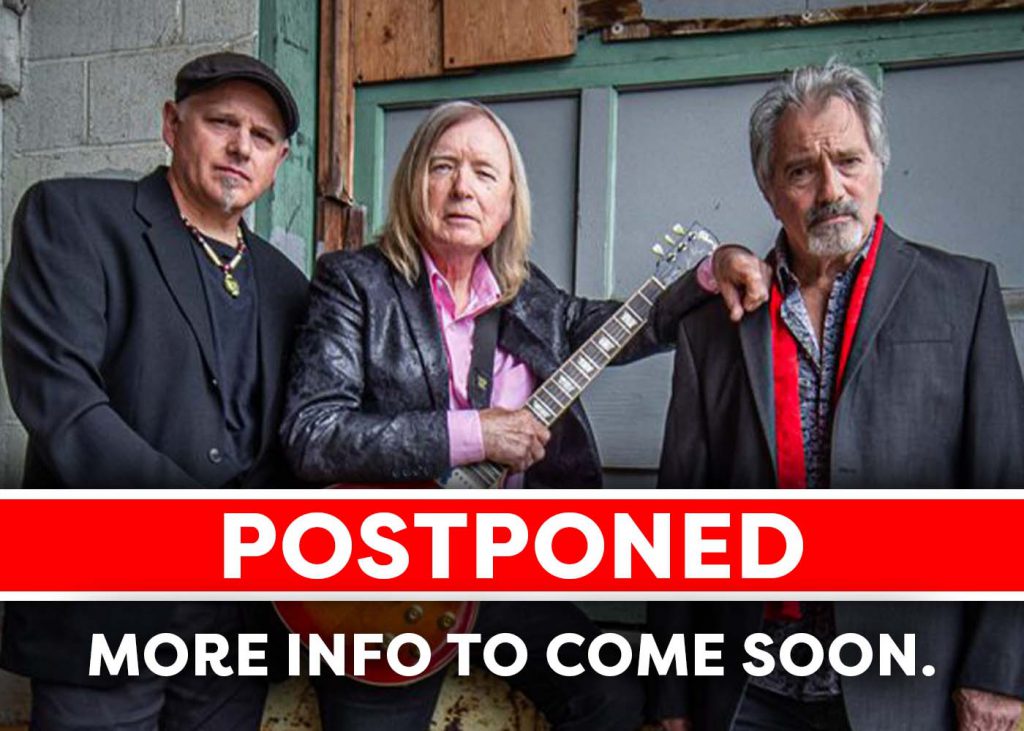 IF YOU BOUGHT TICKETS TO THIS SHOW WE WILL BE IN TOUCH WITH YOU SHORTLY VIA EMAIL WITH MORE INFORMATION ABOUT A NEW DATE. All of the tickets you have purchased are still going to be valid for the new show date!

Savoy Brown was formed in 1965 by guitarist Kim Simmonds in London, England. Simmonds has been the group’s guiding hand from the first singles released in 1966 through the band’s newest effort, their forty-first album “Ain’t Done Yet” to be released August 28, 2020

Energetic blues has been the calling card of the band from the beginning. Blues Rock became the catch-all phrase in the late 1960s to describe the band’s music along with that of contemporaries including Cream, Fleetwood Mac, and Jimi Hendrix.
In fact, in the 2013 movie, “Jimi Hendrix: All Is By My Side,” a Savoy Brown song co-written by Simmonds was included in the soundtrack.
Many of the band’s singles and albums have appeared on the Billboard charts. Through the 1960s, 1970s and 1980’s songs such as “I’m Tired”, “Train to Nowhere”, “Tell Mama” and “Lay Back In The Arms Of Someone” became Hot 100 entries.
Two of the band’s albums in the 1970s, “Looking In” and “Hellbound Train”, appeared on the Billboard Top Forty charts. This pattern continues today, culminating with “Witchy Feelin’,” the band’s 2017 album, reaching #1 on the Billboard Blues Chart.
Along the way, Savoy Brown has toured continuously, making it one of the longest running blues rock bands in existence. Through the years, the band has headlined concerts at many prestigious venues including Carnegie Hall, the Fillmore East, the Fillmore West, and London’s prestigious Royal Albert Hall.
Savoy Brown, having established national status in the 1970s, provided other groups opportunity. Kiss opened the bill on a Savoy Brown national tour as did ZZ Top, The Doobie Brothers and many, many more acts.
Former members, having cut their teeth under Simmonds’ leadership, have gone on to complete their careers with other bands. Among others, these include singer Dave Walker with Fleetwood Mac and Black Sabbath, Bill Bruford with King Crimson, Andy Pyle with the Kinks and Paul Raymond with UFO.
Many familiar names have recorded and toured with the band including Hughie Flint (original Blues Breaker with John Mayall) Miller Anderson, Stan Webb, and Dave Olson (Robert Cray Band).
Three other band alumni – Lonesome Dave Peverett, Roger Earl, and Tony Stevens, went on to become the founding members of the multi-platinum act Foghat.
A resident of the USA since 1980, bandleader Simmonds has received many accolades himself. These include placement on the front cover of Guitar Player magazine, enshrinement on the Hollywood Rock Walk of Fame and acceptance in many regional “Halls of Fame” in the USA and Canada.
“I have always opted for a non-mainstream, yet complimentary, music route,” says Kim – “one that would allow me personal and artistic freedom. In the end, it seems I’ve had the best of both worlds.”
Savoy Brown helped spawn the 1968 UK Blues Rock boom and later opened the eyes of many 1970s American teenagers to their own home territory blues artists.
More than 50 years later, Savoy Brown remains a formidable, progressive Blues Rock force. The three- piece line-up includes Kim Simmonds on guitar and vocals, Pat DeSalvo on bass and Garnet Grimm on drums. This trio has established itself as the longest-running consistent line-up in the band’s history, now going strong for more than 10 years. Their legacy continues with the coming 2020 release of “Aint Done Yet” released by the Californian-based record label, Quarto Valley Records.
Savoy Brown and Kim Simmonds have a body of work that is matched by only a small portion of musical artists. As they continue to tour the world, young and old find inspiration in their timeless music, classic style, and performances.