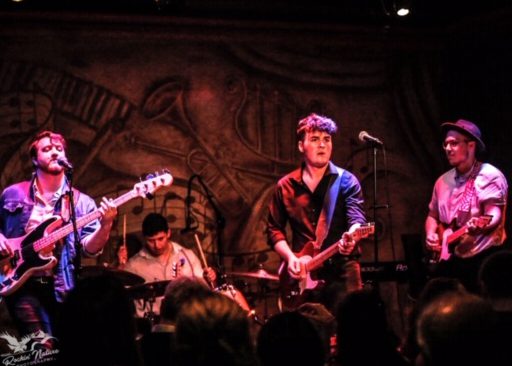 THEY’RE BACK! You’ve seen them, you know them, you love them. Go on ahead and read their bio, or just get right to buying a ticket and selling out this show once again!!

Raised on a healthy diet of Garage Rock, Power-Pop, Roots, Red-Hot Rockabilly, Honky-Tonk and Soul – John Michael Ford (lead vocals, guitar), Joe Alonzo (drums, vocals) and Tyler Kock (bass guitar, vocals) came together during the early months of 2011 and presented a simple, clear-cut mission statement: Make people feel good. And when presented with such a task, we believe there’s nothing quite like Rock & Roll music. We also firmly believe that if you’re gonna do this work, you’d better do it right and give the audience MORE than what they paid for. Spring of 2015 saw the addition of Joe Nocchi on guitar, whose song-savvy sensibilities have proven invaluable to the group.

2015 has been a big year for The Belvederes. The late-fall release of their second full length CD, “Beggar’s Heart” has already brought in rave reviews. “…as good as any rock n roll/Americana you’ll find today” says Rich Wagner, owner of Rediscover Records, one of Chicago-land’s most unanimously beloved record outlets. The subsequent CD release show at FitzGerald’s in Berwyn caught the attention of WGN’s Wendy Snyder, who had great things to say about the band and the set on her midday show, “Bill and Wendy”.

Dynamic playing, tight harmonies, dance floor-friendly energy and lots of love are what you can expect to experience at a Belvederes show. So get in on this rockin’ dance party! Ya won’t be sorry!