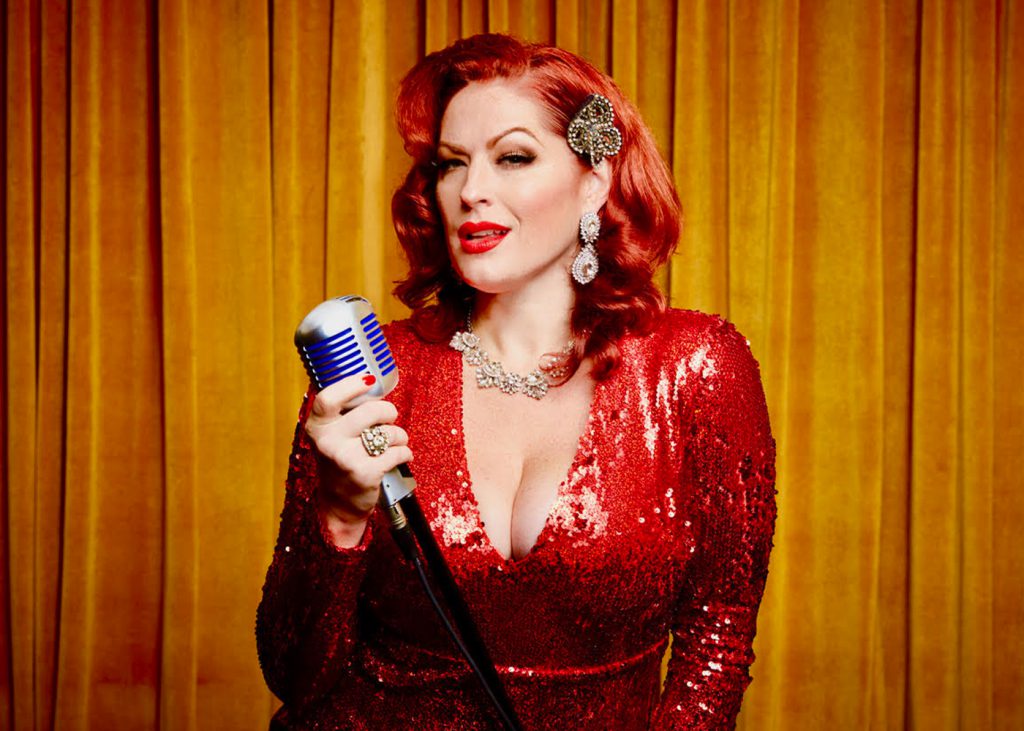 Meghan Murphy is an actor/singer/producer/cabaret & recording artist based in Chicago. A showstopping powerhouse, she has garnered the nickname “Big Red” and has delighted audiences all over the world with her impressive range of musical styles, razor-sharp wit and old school Hollywood glamour. Her multifaceted talents have been showcased on many different stages in the worlds of Theater, Music & Cabaret. As an actor, you may have seen her in shows at such theaters as The Marriott Theater (Mamma Mia!, City of Angels, Footloose), Drury Lane Theater (Smokey Joe’s Cafe’, Hazel), Mercury Theater (Spamalot), Chicago Shakespeare Theater (Comedy of Errors) and Paramount Theater (Cabaret, Rent, Tommy). As a singer, you may have seen her at countless clubs throughout Chicago (The Green Mill, Uptown Underground, Venus Cabaret Theater, etc) or in the annual Chicago Humanities Festival or Broadway in Chicago at the Pritzker Pavilion. As a cabaret and recording artist, she tours her critically acclaimed long-running one woman show The Big Red Show around the country and now internationally with Azamara Cruises and RWS Entertainment. Her original holiday show, Big Red & the Boys is a beloved seasonal favorite, now making stops in NYC, LA, Philadelphia, Chicago, and San Francisco. This past December, their live album, Big Red & The Boys, Live at Feinstein’s/54 Below was released at bigredandtheboys.bandcamp.com. Meghan has continued to stay busy during the pandemic, creating a new travel/performance web-series called Adventures From A Broad, featuring her travels as a guest entertainer on the high seas, and Stoop Sessions, another online series to raise awareness and elevate Chicago based, BIPOC & LGBTQIA+ organizations. Both shows can be found on Youtube, Instagram, and Patreon.com. Meghan has been the lead singer of her Chicago Blues/Soul band Everybody Says Yes with two EP albums available on iTunes, Spotify, & Apple Music. With over a year of only virtual entertainment, she is SO READY to get back in the room and share some space with you (safely, of course!). For more info, get on her mailing list, or to see what Big Red is up to next, go to her website meghanmurphybigred.com or subscribe to her artist page at bit.ly/PatreonMeghanMurphy and get exclusive songs, shows and videos.
Quotes:
“Statuesque in her stilettos, Big Red is a towering inferno of talent, and her willing disciples are there, ready to be burned alive in her flaming embrace.” -BroadwayWorld
“A dazzling redhead with a dynamite voice” – Chicago Sun Times
“From soul to showtunes, laughter to tears, Big Red packs a punch and takes you on a ride. With personal stories, and a knockout voice, she hosts a grand party and a celebration of life.” -Chicago Cabaret Scene
“She is a pied piper in red sequins, leading the way for the people, her fans, and the newcomers to the tribe.” – BroadwayWorld
“As for Murphy herself, this woman is doing what she was born to do. Her abilities as a singer cannot be quantified. With each new song, and new genre of musical choice, her range in voice and musical interests dazzle. There appears to be no octave or style which she is unwilling to attempt or unable to conquer – add to that a natural flair that has been fine-honed to the point of excellence and an ability to connect with every human within eye or earshot and the resulting magic will have you waiting around after the show, hoping Meghan Murphy comes strolling by.” – BroadwayWorld
“The opportunity to hear Ms. Murphy visit with the audience, tell stories (and dirty jokes) and impart her philosophies on love, life, family and acceptance is like listening to a TED Talk with a pitcher of martinis in front of you. “ – BroadwayWorld

“Statuesque singer Meghan Murphy, who has hair the color of merlot and a big voice that can be brassy, soulful, or plaintive as the occasion merits…The results are funny and heartwarming without getting cynical or schmaltzy, owing to Murphy’s considerable charisma, jolly shamelessness, and, at times, vulnerability. Highly recommended.”— Chicago Reader

“Meghan Murphy has the pipes and personality that has entertained crowds for years. If you haven’t seen ‘Big Red’ take over a room yet, what are you waiting for?” -Windy City Times