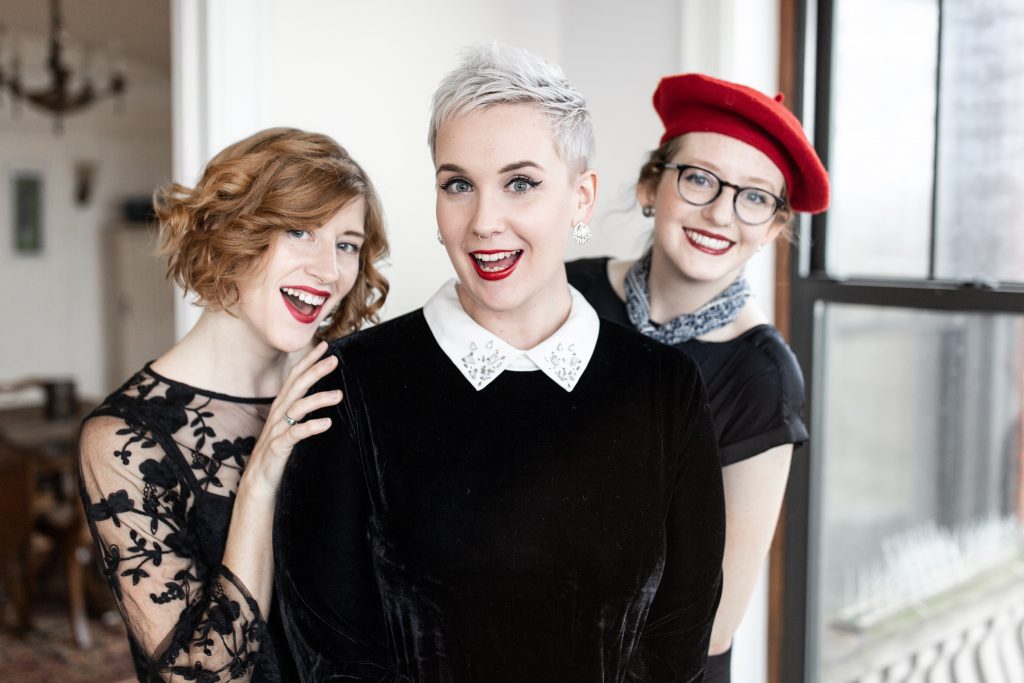 The Peppermint Patties return to the stage with a 90-minute lineup of holiday favorites and classic close-harmony hits made famous by The Andrews Sisters, Chordettes, Lennon Sisters, and more.

The Chicago-based vocal trio was founded in 2018. They are classically trained singers who delight in singing all genres of music. Patties shows are family-friendly and packed with nostalgic throwbacks, musical theater favorites, jazz standards, and quirky covers.

The show is accompanied by Sarah Jenks and features guest artists Wesley Taylor and Isaac Frishman.

Anna Caldwell is a Chicago-based soprano and marketing professional with a passion for performing in various genres at the professional, community, and educational levels.

Recent cabaret performances include “Won’t You Be My Galentine,” “A Very Christmas Cabaret,” “Bespoke: An Evening of Song,” and “Perpetual Anticipation.”

She works as a supplemental section leader for St. Benedict Catholic Church and will make her Chicago Fringe Opera debut in Jake Heggie’s Two Remain in March 2022. She will make her regional debut with Actor’s Moveable Theater in Ohio as Rose in Song of Singapore, March 2022. She has an MFA in Voice from DePaul University.

Daina Fischer is a Lithuanian/American dramatic-soprano newly based in Cleveland. She has sung all over the Midwest and also internationally, working with renowned conductors, coaches, and teachers. Daina enjoys performing opera, musical theater, jazz, and acapella music. She is an alto section leader and soloist at various churches and synagogues. Daina is active in the Lithuanian music community in the United States and has also given performances in Lithuania.

Her cabaret performances include “A Very Christmas Cabaret” and “Won’t You Be My Galentine?” with the Peppermint Patties, “Dainos iš toli” ( Songs from Far Away) a cabaret performance in Lithuania, and “Bespoke: An Evening of Song.” She holds an MFA in Vocal Performance from DePaul University.

Alongside her passion for performing, Daina is a passionate educator and owns her own voice teaching studio. She also works as a model and social media manager.

Laura Smalley is a Chicago-based actor and singer. She has performed with Metropolis Performing Arts Centre, Music Theater Works, Forte Chicago, Chicago Fringe Opera, Grant Park Music Festival, Gilbert & Sullivan Opera Company, The Savoyaires, Singing River Productions, and Slotted Spoon Initiative. Her cabaret performances include Sleep/Creep/Leap, A Very Christmas Cabaret and Won’t you be my Galentine with The Peppermint Patties, and Reunion: A Night of Sondheim. She holds a BM in Vocal Performance from DePaul School of Music.

An advocate for the arts, she has worked for many prominent arts organizations, including Des Moines Metro Opera and Chicago Opera Theater. She is currently the Executive Director of Chicago Fringe Opera.